There are 5 styles of Scottish dancing commonly known, such as:

Scottish Country Dances are ballroom dances. They are usually performed in "sets" of four couples, standing one behind another (but there are variations). The dance consists of figures (usually corresponding to 2, 4 or 8 bars of music), which follow each other, and the couples move along the set in the meantime.

There are many versions of the origin of the name of this dance style. Sometimes they are wrongfully considered as folk dances. Many experts agree that the term Country Dancing descended from the French contredanse (the dance, in which partners stand opposite each other). The main types of the music are reel, jig and strathspey.

If you know the basic steps and figures, then the dances in general are not complex for you. But, during the dance you have to be careful and do not sleep in the set, because the next figure may require participation of any couple. There is definite etiquette in Scottish country dancing, which means that all dancers must be respectful and attentive to their partners in the couple and in the set.

Scottish country dances are not competitive dances, but rather a form of communication. Their main value is that you can have pleasure from the very beginning. It is definite though, that the higher your dancing skills are, the more pleasure you get during the dance.

But it is very important not to forget, that the dance is always something more than just the set of movements with the music. We want, that the people through the whole Russia could have the opportunity to meet together and do dance Scottish dances, because they bring joy, raise spirit and help to develop communication skills. 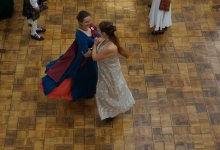