Scottish Country Dances appeared in Russia relatively long ago, but before 1993 the dance events were intended exclusively for the diplomatic community of the British Embassy - it was like closed club.

In 1993 the situation changed a little. Three businessmen from Scotland - Mike Mackie, Stuart Thom and Tom Crozier - founded the Saint Andrews Society of Moscow. First thing they organized was... Scottish dancing classes under the direction of Irene Mackie. These classes were open for all, but it happened that only a couple of our compatriots visited them. The most part of the students was foreigners.

To commemorate 850 years of Moscow Irene devised a new dance - "Moscow 850 Celebration Reel", which was presented to the public during the first Highland Games in Moscow in June 1997. The dance was registered in RSCDS and was even broadcast on the British TV.

When Mike and Irene had left Moscow, Anna Kostyukova became our teacher. There were about 4-5 Russian dancers. By the way, Anna became the first Russian to take part in Summer School, organised every year by the RSCDS in Saint Andrews, Scotland, since 1927.

As time passed by, the number of Russian dancers increased and by the beginning of the 1998 the most of the students in the group were Russians. Catherine Finogenova became the leader of the group. By the time many of the founders of the St. Andrews Society of Moscow left Russia and were replaced with other Scottish culture enthusiats, who, supporing and developing the society, always supported the Scottish Dancing group.

From 1998 to 2001 the Scottish dance classes were generally like dancing evenings, with the little part of them dedicated to the attempts of learning basic movements, and the rest of them - to the dancing how we understood it at that time.

Everything changed in May 2001, when a group of dancers from Scotland leaded by Moira Stacey came to Moscow. Then we saw for the first time, what the real Scottish Country Dances were. After week of workshops taught by Moira it became clear, that our future is impossible without additional study. In August 2001 I went to Saint Andrews to the Summer School of Scottish Country Dancing. How I managed to get into the group, where the dance teachers were taught - it is another story. I just can say, that I had feelings like getting from amateur village performance group to the Bolshoi theatre ballet performance without previous preparation.

These two weeks were the hardest, but also the happiest period of my life. As a result - I exactly have known what and how I want to teach people, who come to to my classes.

The year went by. During the season of 2001-2002 the skills of Moscow dancers increased distinctly. Speaking honestly, the way the dances are danced in Moscow now, has nothing in common with the previous way. When the dancers from Scotland came to our classes, they noticed very high level of our group.

In August 2002 I went to the Summer School for the second time and passed the exams for the RSCDS preliminary teaching certificate. In the same year, two girls from our group - Masha and Lena - came to the last week of the Summer School. It was exceptional pleasure to hear from Scots how good Russian girls dance.

In 2002-2003 season group was finally formed as it exists now. The technical level of the dancers reached RSCDS standards. The demonstration team "Moscow Reels" was organized. The first interview with Catherine Finogenova was published. The season finished with traditional visit of the Summer School by the Russian dancers.

The next season became successful for our demonstration team. They performed both in small halls, and took part in big events such as Graduation Ball in the "Rossija" concert hall. But the main goal of the group was the work with enthusiasts who were dancing mostly not for public, but for their own pleasure. We can state with pleasure, that for many people of different occupations Scottish Dancing became the pleasant hobby. Moreover, in the Autumn of 2003 our website was created.

In 2004-2005 season two important things happened. The major part of "Moscow Reels" founded the demonstration group and the dancing school "Dan Rùnach". Another, and perhaps the most important thing, is that two of our dancers took part in the hard fighting for the RSCDS teaching certificates. Firstly, they successfully passed written exam on the Scottish Country dancing theory. In August they went to the Summer School in Saint Andrews for another two exams - dance practice and teaching. We all wished them luck, and this worked - there were three certificated Scottish Country Dance teachers in Moscow now. In the same time, our teacher and leader Catherine Finogenova also passed the exam for the full teaching certificate.

The beginning of  2005-2006 season brought two news. Firstly, the new teachers started their own classes. On Wednesdays, after a hard working day, the dancers could join and relax in the company of each other doing their favorite hobby. However they couldn't forget about technique and complex figures. Secondly, part of the "Dan Rùnach" studio members separated and organized "Shady Glen" school. The season ended on the major tone: well-known RSCDS teacher Helen Russell came to Moscow with the series of workshops. The classes lasted for 3 days, 6-7 hours each day. It was more than worthy ending of season.

Moscow Branch of RSCDS was officially registered in 2005. Scottish dancing came to new cities. Nowadays you can dance Scottish practically everywhere in Russia. We hope that the development of Scottish dancing will continue involving more and more new members. 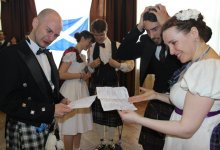