Irina has been dancing Scottish dances since 2010.
She has been teaching in the Studio of the traditional and folk dancing "Beltane Bonfires" in Cheboksary since 2012.
She became a member of RSCDS in 2013.
In 2013 she successfully passed exams for the first part of the RSCDS teaching certificate, her tutor was Malcolm Brown (United Kingdom).
In 2014 she went to the RSCDS Summer School in St. Andrews.
In 2015 she received the RSCDS Full Teaching Certificate, her tutor was Helen Russell (United Kingdom). 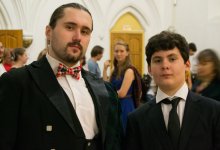